One of my most special memories from living in Israel for seven years was visiting a Rebbe for Shabbat in the Ultra Orthodox section of Jerusalem, Meah Shearim. The highlight of his Shabbat meals were the special wines that the Rebbe personally brewed in honor of the Sabbath. Walking away from that shabbat table, i promised myself that once i have my own home and family, i too will be making wine for the Sabbath, then reality hit.

Making delicious wine is hard! After a few adventurous, and humbling flings, i like so many other “home brewers”  had to settle for $9 Hertzog Trader Joe’s wines. This all changed four month ago when i met Alchema @ Haxs Demo Day which was catered by Lchaim. Alchema  has created a brewing machine that is accompanies with an app enabling you to home-brew your own unique flavor of hard craft cider. With the simplicity of making a pot of coffee, you can turn your favorite fruit into craft cider with limitless flavor options.

Recently they have launched a successful crowdfunding campaign, raising over $340,000. You can support the campaign and preorder your Alchemy here.

Recently,  i had the privilege of introducing Oscar CEO of Alchema to hummus and falafel @Sabra Grill while we chatted about home brewing and his vision for disrupting the 3 Billion Dollar Hard Cider., and home brewing markets. Here are a few take aways from the conversation.

Oscar has spoken to all of his Kickstarter supporters and has learned that there are two primary driving forces behind the campaign’s success.

One will be able to buy accessories including personalized label kits, wine bottles, and unique flavors. Customers could subscribe to yeast that is already certified Kosher. While the device comes with an App with a wide range of recipes the community members will be able to contribute their own recipes to the platform. 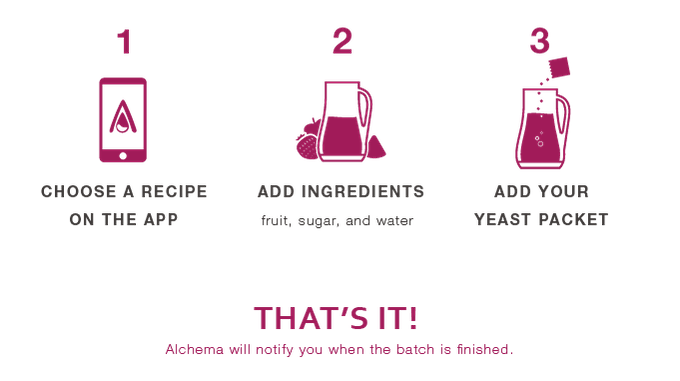 The device earliest shipment is in June 2017 but ultimately the device will be found in local stores by the end of 2017.

I see the two driving forces behind Alchema’s success ( Dietary Limitation and Creativity) to be totally aligned with the Kosher driven community. Additionally, this will bring a deeper level of personal ownership , connection and mindfulness to core rituals which are the foundation of Judaism. Next time you come for Shabbat, you might be tasting Lchaim’s mint, pomegranate champagne.

DYI Kosher Brewing Made Easy2016-09-082016-09-08https://lchaimfoods.com/wp-content/uploads/2018/10/lchaimfoodslogo-150x150.pngLchaim Foodshttps://lchaimfoods.com/wp-content/uploads/2016/09/Alchemy.jpg200px200px
About
Alex Shandrovsky
Alex Shandrovsky is a Silicon Valley based ordained Rabbi and founder of Lchaim Foods. He is an advisor for Indiebio, the world's largest biotech accelerator, where he educates start ups about the value of Kosher in the modern world. His work has been covered by international press including Haaretz, San Francisco Chronicle and Newsweek. A powerful speaker, he has lectured in leading universities including Stanford ,and Singularity University.

Can insect powered food be Kosher?Future of Food